Binaries for Menge will be available soon, but for now, you will need to Build Menge From Source.

A zipped copy of the latest Master branch is available here, or you can keep your codebase up to date by cloning the source from our git repository.

To clone Menge's source, you will need to have git installed. navigate to a directory where you would like Menge, and execute the following command:

This will download Menge and the base set of pedestrian models and plugins.

Build instructions vary by environment. Currently, Menge has been built on

Right now, your code-base should look something like this:

Navigate in the projects folder to your version of Visual Studio. Inside, you will find two projects. Menge.sln will contains the core Menge Framework, and Plugins.sln contains the set of example plugins. Build Menge first, then the plugins.

Menge requires g++, CMake, OpenGL, libsdl, and libpng installed. Navigate in the projects directory to the g++ directory. Type "make" and, if all goes well, Menge and the plugins will build.

These additional libraries may be needed depending on your version of linux. For each package, you will need the development version (suffixed with _devel, -dev, etc.):

What if it didn't work?

We are aware of a few issues building the solutions, particularly in VS2012. Please email us at menge at cs.unc.edu and we will provide whatever help we can. As with any first release, we are sure to find bugs and will work proactively to fix them as soon as possible.

Now that Menge is built (or downloaded), we can run an experiment. In your system's shell environment, navigate to the newly created Exe directory in the root directory of your download. execute this command:

With any luck, you should see an openGL window that looks something like this: 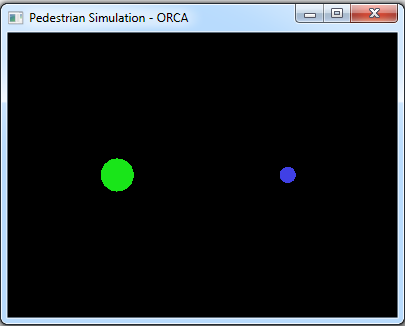 Push spacebar and watch the agents trade places! You can press h to see the multitude of available interactive options.

All of the examples in the examples directory (in the root of your download) can be run in this way. Here are some more examples to get you started:

or, you can run allExamples.bat (allExamples.sh) from the executable directory to see everything available with the release.

We have observed one pervasive issue in Menge\MengeCore\viewer\GLViewer.cpp. If you run the simulations, and find any and all text to be large grey boxes, comment out line 268.